Along the South West Coastal Path to Torquay by the Sea. 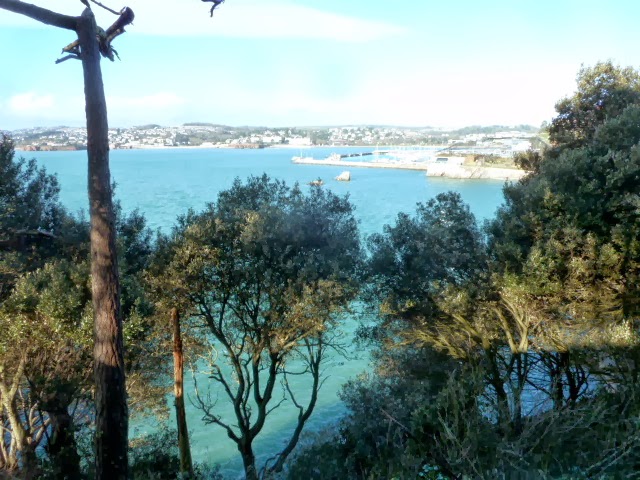 A distant Torquay marina viewed for the South West Coast Path Trail high on the cliff.

The sun shone on Saturday while I walked on the coastal path along the top of the cliffs towards Torquay town centre.   This coastline is called the "Devon Riviera," and in the sunshine, it was possible to imagine walking along the coast in the South of France,  with the turquoise Mediterranean Sea glistening through the trees.   I felt as if the spring had arrived. A small castlelike summer house looking out towards the sea.

The South  West Coast Path National Trail runs 630 miles from Minehead, on the edge of Exmoor to Swanage on the south coast, a walk I would love to do if my ankles can stand the pace. 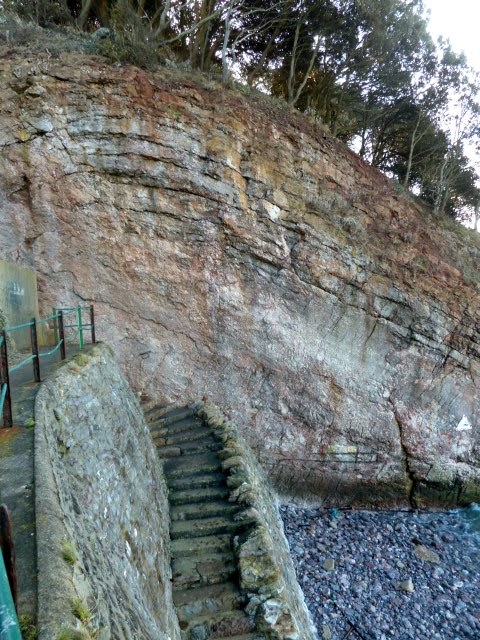 Rock strata on the beach below the coastal path.

This place is a geologist delight, with the chance to find many fossils on the beach and in the stratified rock faces.  Evidence of the bad weather was easy to see, with twisted handrails wrecked by the wild waves,  and shingle and seaweed thrown up onto the promenade and into the road. 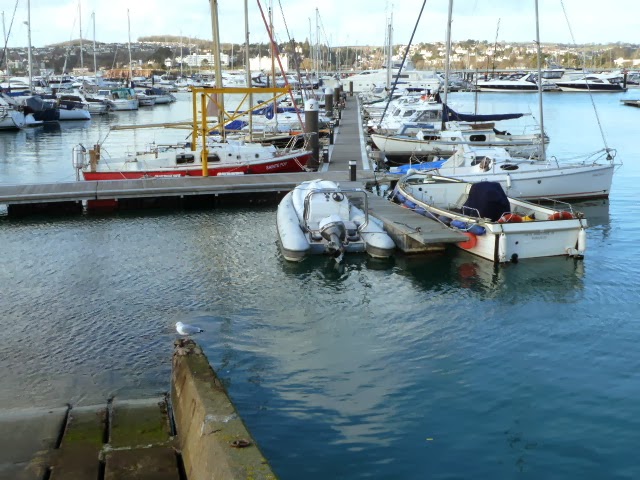 A lonely seagull looks out from his perch beside the marina with its variety of small dinghies and huge luxury cruisers.   Fortunately we had a lovely day for our walk, with a nice lunch and a cuppa at a cafe beside the marina.    A sign gave a warning:  "Please look after you lunch, otherwise the seagulls will whisk it off your plate."    I defended my coronation chicken baguette and salad with my life!

A Visit to Exeter Cathedral. 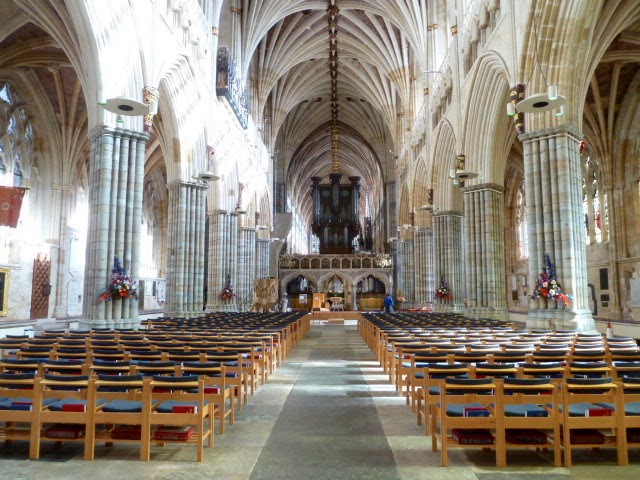 The Nave looking towards the centre organ pipes.

I visited Exeter Cathedral on Friday, just a one hour visit, as a lunch stop on my way down to Torquay in Devon.  What an amazing place, with the longest, uninterrupted vaulted ceiling in England.   How did the builders and stone masons manage to construct this wonderful buildings using nothing but rope and pullies, and I wonder how many workmen died in the process.

The building was founded in 1050 in the Romanesque style by the first Bishop Leofric, and throughout its life many additions in various styles have been made to the building.  Between the years 1270 and 1350 the towers were enlarged, and the building was completed by ca 1400.  Like most English cathedrals, Exeter suffered during the Dissolution of the Monasteries, but not as much as it would have done hat it been a monastic foundation.

Further damage was inflicted during the English Civil War when the cloisters were destroyed. Charles ll had a new pipe organ built by John Loosemore, and Charles's sister Henrietta Anne of England was baptised here in 1644.   During the Victorian era, George Gilbert Scott carried out some refurbishments. 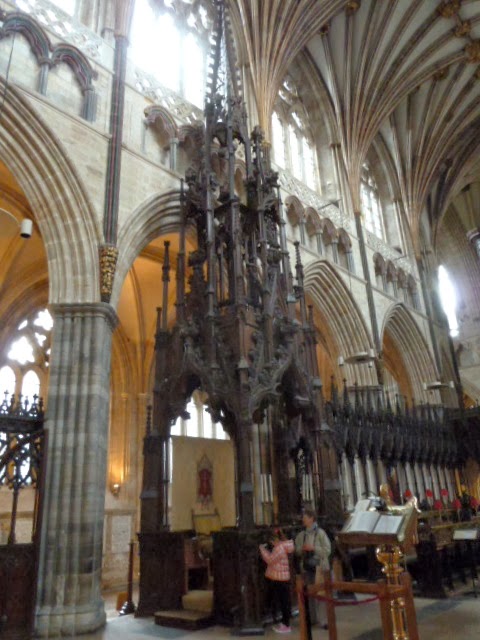 The largest Bishops Throne and Hood in Great Britain.
The hood above the Bishop's throne is 18m in height, and was carved out of English oak between  the years of 1312 and 1322, and is held together with numerous wooden pegs. 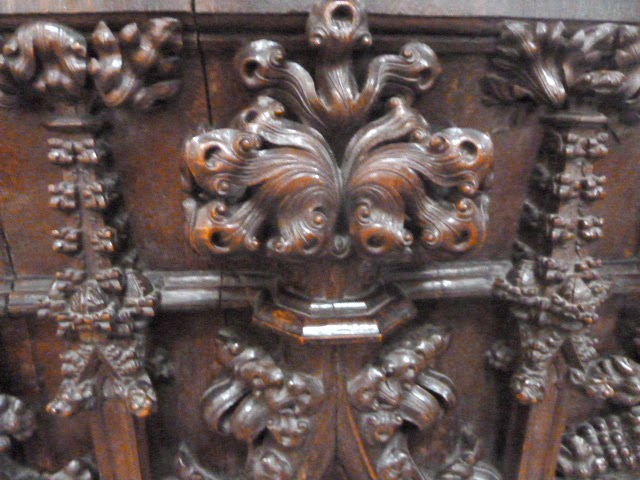 Detail of woodcarving on the base of the Bishop's throne. 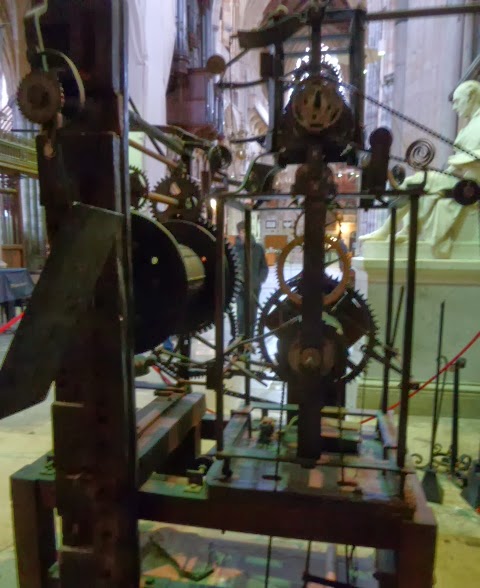 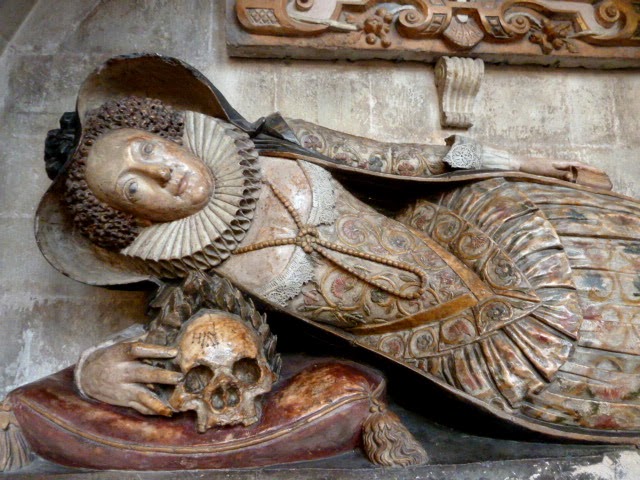 Monument to an Elizabethan Lady.
The cathedral contains some wonderful grave monuments and Chantry Chapels.  The carved detail on this Elizabethan lady's clothing is exquisite. 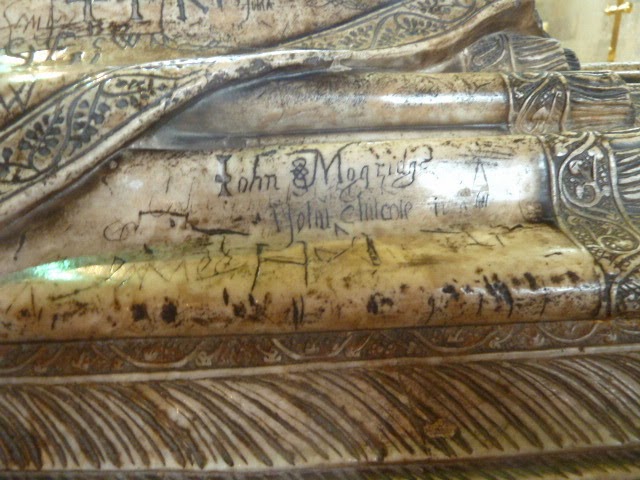 Historical graffiti, carved into an alabaster tomb.
Alabaster is a soft stone and easily scratched.  This tomb was covered in graffiti left by early visitors to the cathedral. 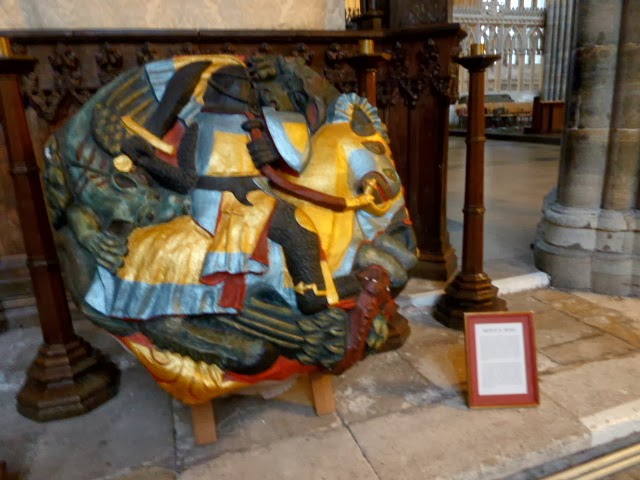 Papier mache, life size model of a ceiling boss.
Looking up at the vaulted ceiling, it is hard to imagine how large the bosses that cover the joints in the arches are.  This papier mache model is a life size copy of a boss, and is huge.  The original carved stone bosses must have weighed at least a ton!   I hope they don't fall down.

Off to Exeter and Torquay Today. 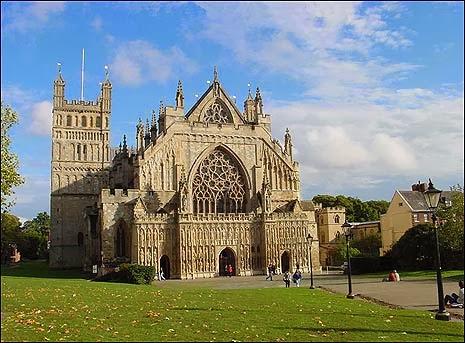 Off on a weekend's holiday this morning, and will stop for lunch in Exeter, where I will visit the cathedral and ponder the meaning of life!

I should arrive at the Torquay Hotel at around 6pm, ready to change for a welcome evening meal and a beer.  Then I'll take a stroll to the beach and the sea, take off my socks and paddle in the cold water!  Thank goodness the gales and high tides have paused for my weekend.
Posted by Vicki M at Thursday, February 20, 2014 No comments:

Signs of Spring in Devizes. 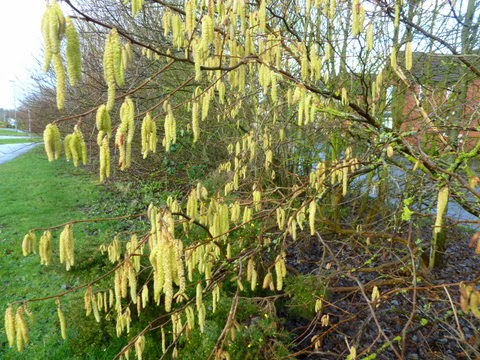 It felt like spring this morning!  The sun peeped through the clouds, it was not raining, and it felt warm and springlike.  I do hope the warmth will last, as these plants will be in trouble if the cold weather arrives here from the USA. 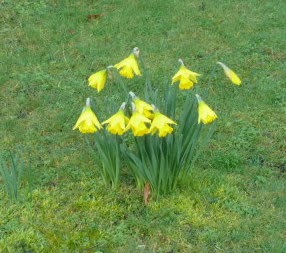 I found no snowdrops on my walk, but I know that they are blooming in the parks and gardens around Devizes. 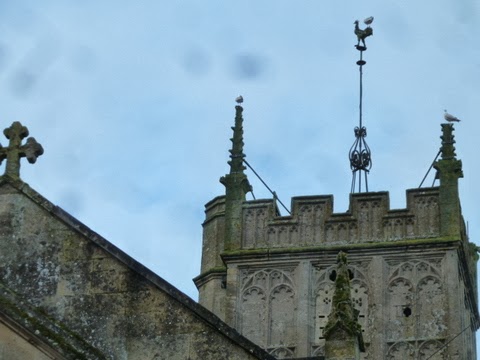 The birds are looking for partners, although the one on the weather vane will be out of luck.

As spring is in the air, the birds are seeking partners for this year's batch of fledglings.  The seagull on top of the weather vane will not have a lot of luck with the metal cockerel. I'm sorry about the dark blobs on the photograph.  It was taken with my old camera, which has a dirty, inner lens, that I cannot clean.  I did try to air brush it out, but failed to understand the instructions for doing so!

On the tower, low down to the right, can be seen a cannonball hole, showing the point where, during the Civil War in 1643, cannonballs were directed at the town by Cromwell's army, who had encircled the King's army in Devizes.  Prince Rupert managed to break out of the town, and rode on his horse to Oxford for gather more troops.   These eventually arrived, and the "Battle of Roundway Down"  was fought on the hills above Devizes in July 13th 1643.  The army of King Charles l won the battle. 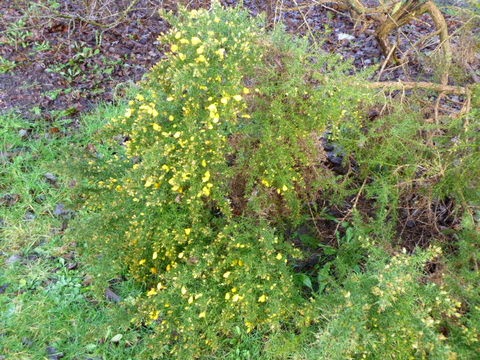 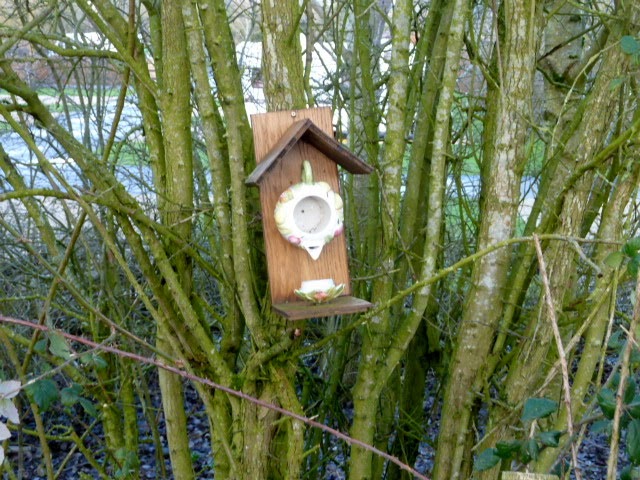 The birds drink and feed from this original bird feeder.

Whilst wandering along the canal towpath with friends in Sells Green, and on my way for a birthday beer in "The Three Magpies"  I came across this lovely, novelty bird feeder nailed to a convenient tree.  What a lovely idea, and one easily copied.  I could not see it in action, as not a bird was to be seen.  Maybe they had gone to the pub! 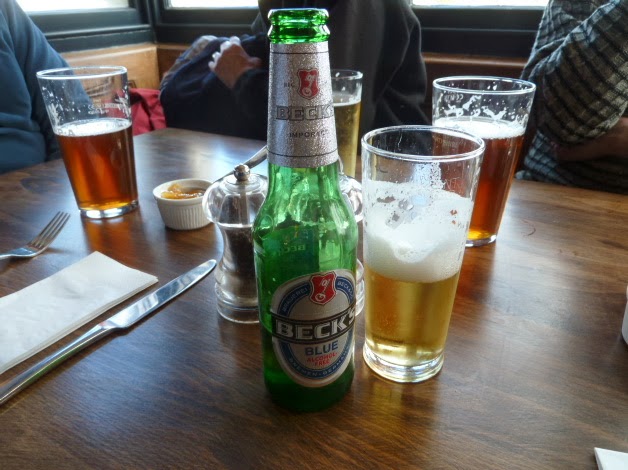 This is alcohol free beer, which is rather a contradiction!  On Fridays I have an evening rehearsal with the choir at Marlborough, and too much beer drinking at lunch time, means I feel sleepy for the rest of the day.  I do not sing well when I am asleep!

News is a little thin on the ground at the moment, because the weather is so terrible, I cannot go out news and photograph gathering.  Things will pick up when the storms come to an end, soon I hope with a bit of British luck.
Posted by Vicki M at Saturday, February 15, 2014 No comments:

Walking in the Floods near Semington and Sells Green. 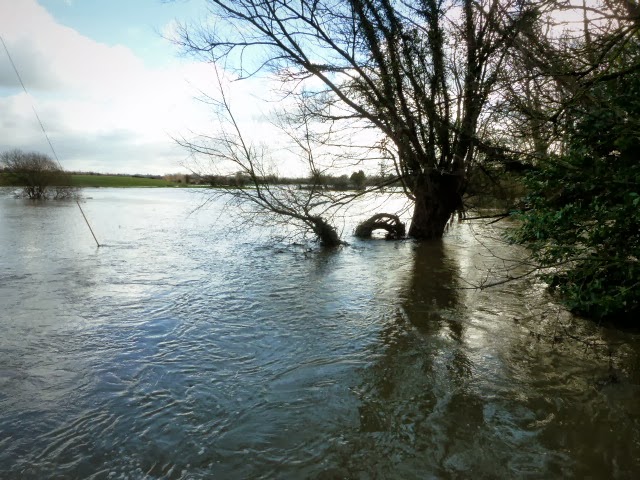 The brook in full flood near Semington.

The atrocious weather has meant very little walking on my part, and that of both U3A walking groups.  The Wednesday group has cancelled so many walks, and although the Friday group has been  luckier, we are selecting walks on firm surfaces, meaning we spend more time on tarmac paths than walking across grassy fields. 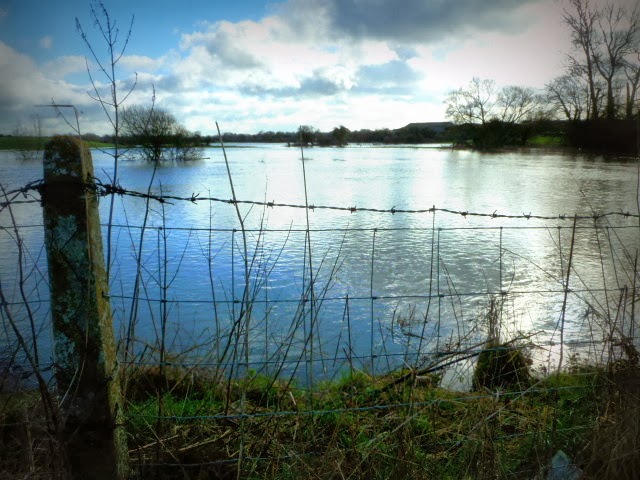 These photos show the flooded Semington Brook, a normally gently flowing stream, that stays in its bed.  However with so much rain, it has become a torrent and overflowed into the neighbouring fields and gardens.  One house is perilously close to becoming inundated!  It must be terrible to have ones house flooded. 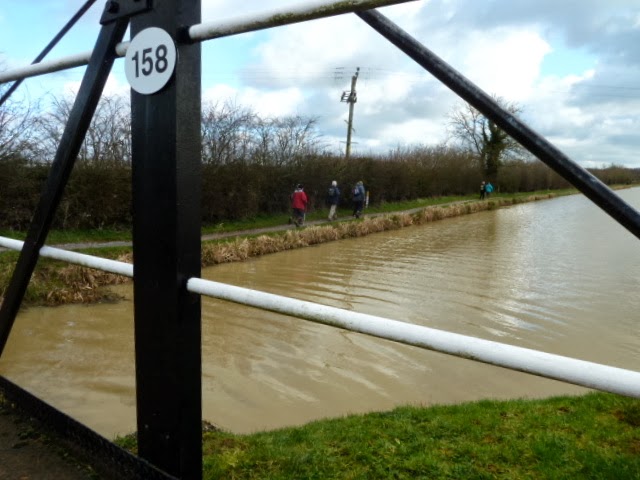 Walking the towpath of the K&A near swing bridge 158.

Ten walkers took the walk from Seminton back to Sells Green for lunch in "The Three Magpies."  We stopped for a breather at swing bridge 158, and accommodation bridge, that allows a farmer to move his cattle from one side of the canal to the other. 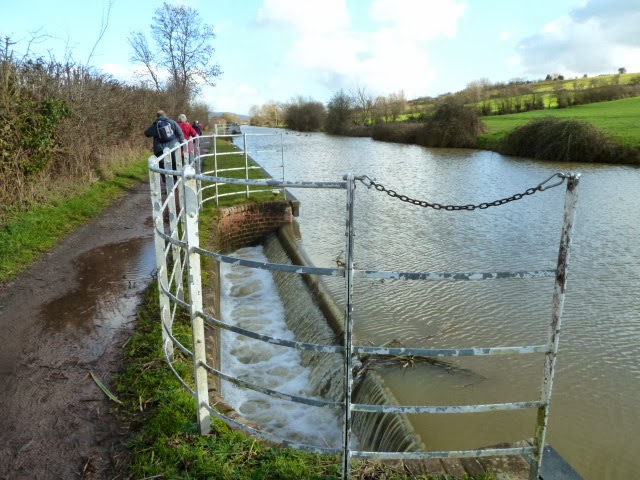 The canal water is well managed, and above can be seen an overspill weir, that maintains a constant level of water in the canal.  Surplus water overflows into the pound below the lock, and provides the next lock down with water, should it need to be filled.  Water management has become a topic for conversation at the moment.  We have too much water in England!

In the Museum for a Talk on the new Stonehenge Visitor Centre. 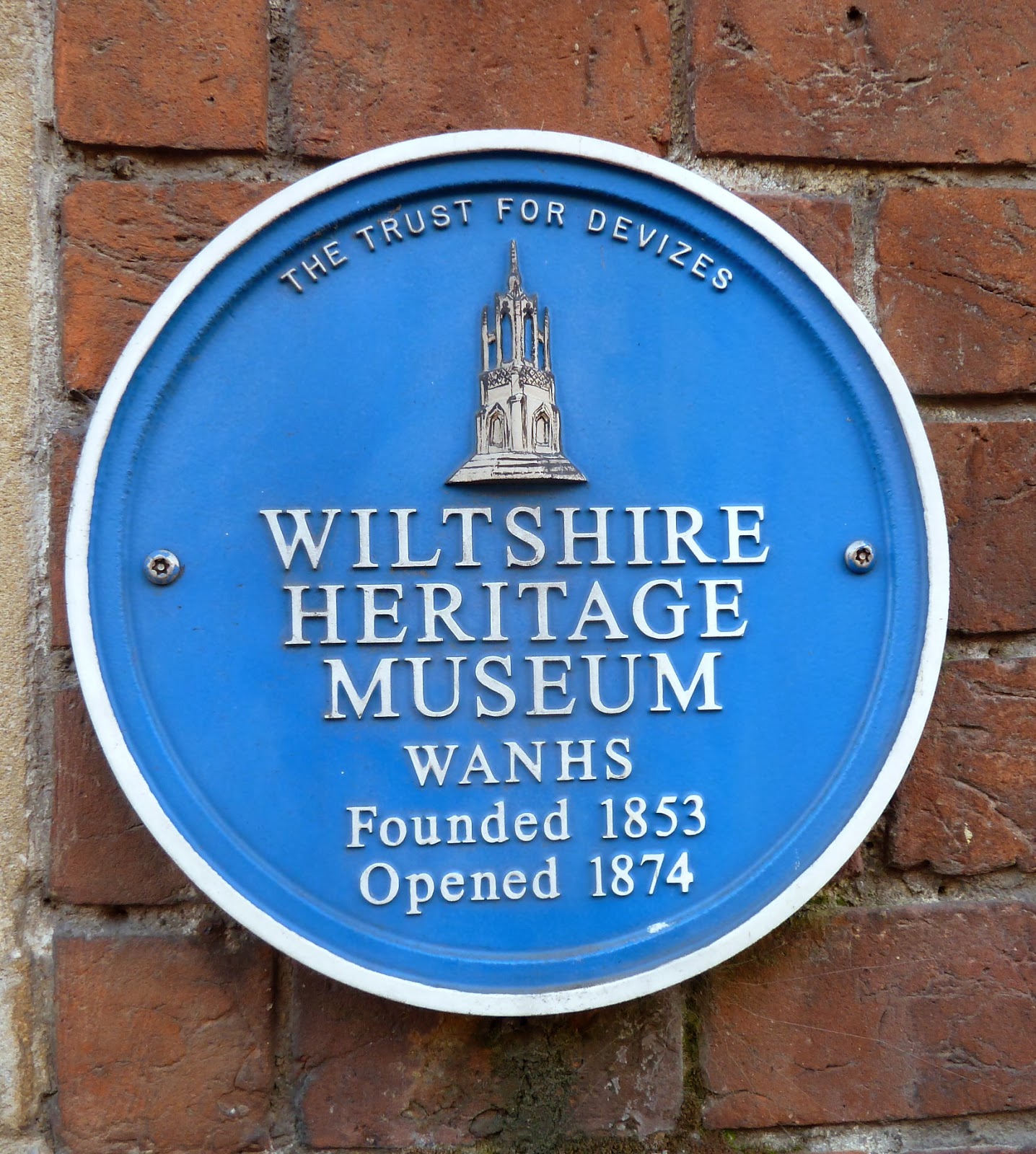 Devizes Museum presents twice monthly some very interesting illustrated talks about matters of local history and archeology.  Last Saturday's talk, given by two very enthusiastic ladies, one with a soft Irish accent, gave us an insight into the planning and eventual completion of the new visitor centre at Stonehenge, which opened just before Christmas 2013.

Stonehenge attracts visitors from around the world, and is so popular and iconic, that it is a victim of its own success.  One one very wet day a few days after the opening of the centre, 5000 people came to visit, and tested the new facilities almost to destruction!  The continual rain that's plaguing England at the moment, did not help, and left the site knee deep in mud in places.  Not a good start to 2014. 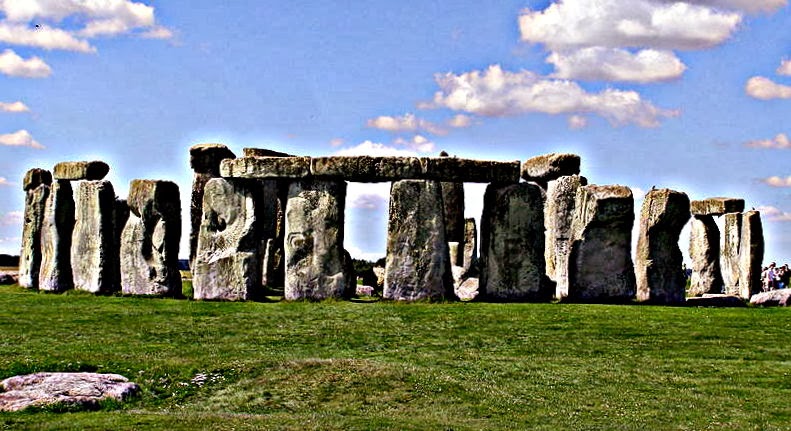 Stonehenge, a place of mystery and imagination.
Posted by Vicki M at Wednesday, February 05, 2014 No comments:

A Windy Morning at the Farmer's Market. 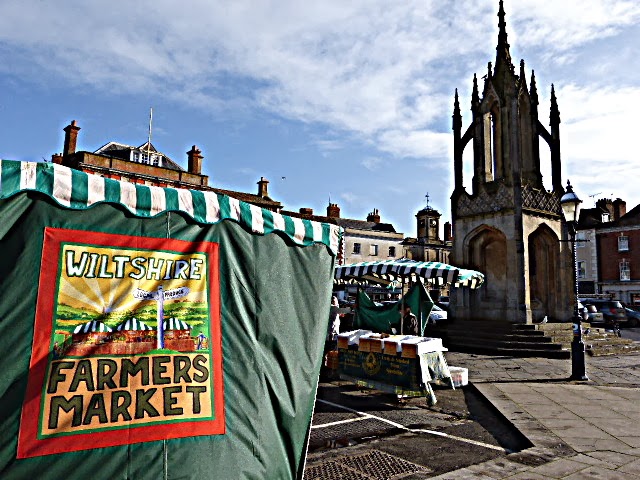 Devizes was granted a Royal Charter in 1141 by Matilda, the daughter of William the Conqueror's third son, Henry l. This status remained for 833 years until local  government reorganisation in 1974.   A market has been held every Thursday around the Market Cross, built in 1841 at a cost of £1500.  Devizes has retained its heart and focal point as an integrated centre to the town,  a centre which has been lost is many other local towns.  These photos show the "Farmers' Market" which is held once a month on a Saturday morning near the Cross. 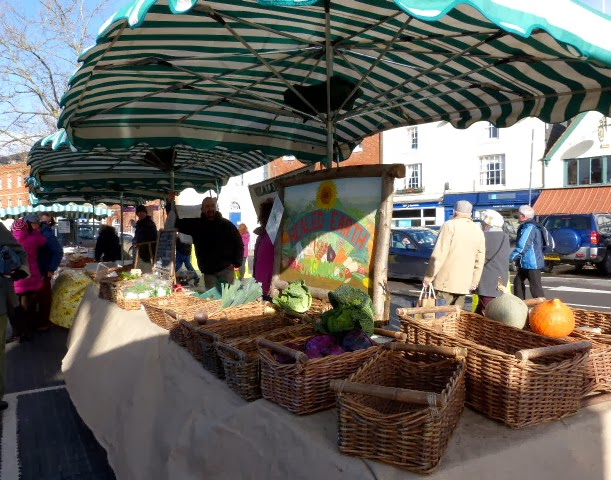 The locally grown produce, fruit, vegetables, cheese, cakes, eggs, honey and many other tasty products deck the stalls, each run by a local farmer or small producer. 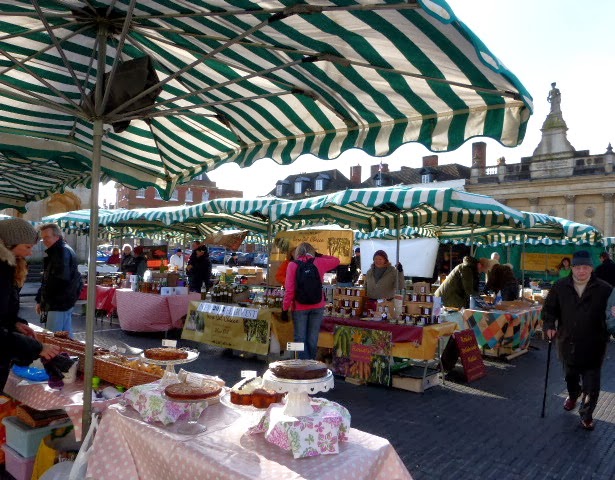 I had to avoid temptation at the yummie cake stall!

The weather here has recently been very wet and windy, and many stall holders had problems trying to stop their canopies flying off into the air.  It was windy on Saturday, but at least it did not rain!
Posted by Vicki M at Monday, February 03, 2014 No comments: